Project: Paint a mural of a mammoth for Itasca County Historical Society.

The Itasca County Historical Society has moved to a new location and they are in need of a new mammoth mural to complement the tusk found interred in the area. I’ll be posting some photos of progress and the finished result as it comes available. It has to be finished by the end of February, 2013. So I’ve got a month to hunker down.

The final painting will be 9’x9′ so the plan is to do more research, complete a final, scaled drawing, scan it in, projected with an LCD projector, trace it,  and finally paint.

I realized my deadline is coming quickly so I did some work on the mural this weekend. I did a second draft of the preliminary sketch in blue pencil and inked it with a trusty old Sharpie (which after eating kimchi later in the month I realized Sharpies and kimchi have a similar aroma). Then since the sketch was only to be a guide and didn’t need a high resolution for projecting and tracing, I used my iPhone to ‘scan’ it into my computer with a quick photo.

I uploaded the photo onto my computer and then using Photoshop I cut it up and readjusted the composition to fit better in the rule of thirds.

For aid in visualizing the final, I colored it in Photoshop and did an overlay onto a photo of the wall to be painted. It got the nod of approval from the folks at the Historical Society.

After a long weekend enjoying the frozen wilderness off the Gunflint Trail, I returned to town realizing with just over a week until ICHS’s grand opening…I had better get this pachyderm painted. It began with technical difficulties and trouble getting the projector to read the

computer. After time I overcame that obstacle and got the image projected. I wanted to fill as much vertical space as possible and wasn’t sure how far to the left I could extend the painting. So in retrospect I should have moved the image left so I wouldn’t have lost the whole right side of the composition. Alas, what’s done is done. Below is a series of the first night’s progress, about three hours of work…one of which was fighting with technology. 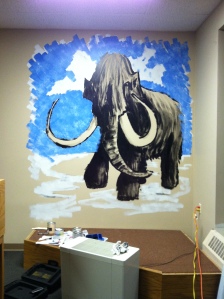 I returned to lighten the sky with a thin white wash gradient over the blue and began to add brown to the mammoth. After starting to fill in details on the clouds, I suddenly questioned whether (no pun intended) the cumulus-like clouds I was depicting actually form in cold ice age weather. I did some quick research and found another formation more likely seen in the cold. I free-styled it, but it just looked like a white, unplanned mess. The solution? Remove the clouds altogether. I painted sky over my mottled mess and called it good. 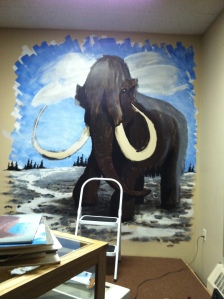 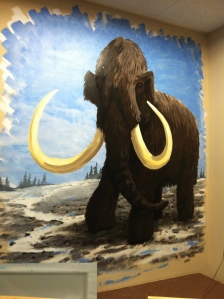 Amazing how the angle can skew the size of the tusks…I had considered forcing the perspective like a piece of Julian Beaver sidewalk art so that the mammoth would appear to pop out of the wall from a certain angle… but I didn’t. One or two more sessions of work and it should be ready for the February 28th museum grand opening.

Done, perhaps? I spent some time with finishing touches Monday night and kept going back to fix things. I’m not happy with the tusks altogether but I decided to leave well enough alone. Let’s call it finished! 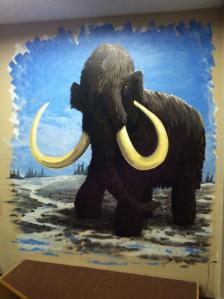 Although not referenced in the text, look who sneaked into the background of this news article in the Herald Review…

Status: Completed! (but under final revisions before printing)

There was oral history in my family about my great-great-great grandfather who marched with General Sherman in his march to the sea, and who later owned a general store and let kids trade their trouser buttons for candy. This inspired me to research more and put it on stage. The results were a story that connected a veteran’s struggle to reconcile his past as a soldier in the American Civil War.

My summary of the plot is as follows:

Based on the life of Joseph L. Hall and actual events, Closure is set in 1884 Idaville, Indiana, with flashbacks to the protagonist’s Civil War experiences of the 1860’s. A quick-witted man who is full of heck and runs a general store while auctioneering on the side, Joseph wrestles with symptoms of PTSD and feelings of guilt connected to his roles in past battles. As he struggles to win the internal civil war of finding forgiveness for himself, he delights the town kids by letting them trade trouser buttons for sticks of candy. Of course their mothers are less than impressed with the idea when their children come home with their pants falling down!

A play without being produced is only half completed; and I was fortunate to have the Grand Rapids Players produce it in October 2012 with a reprise for veteran’s day that November. I also had the privilege to audition and play the role of Joseph L Hall. The performance was well-received as indicated by the following reviews:

“Amazing!!! I love love loved it! Moved me to tears and to laughter!” S. Richards

“My attention was riveted throughout…A treat for people who think.” J. Mason

“I was so impressed in so many ways. -especially with the obvious research you put into the story, the cleverness and humor…” M. Jess

“I don’t know when play will be produced again, but I highly recommend it.” D. Hall

Closure is available for purchase and performing rights here. 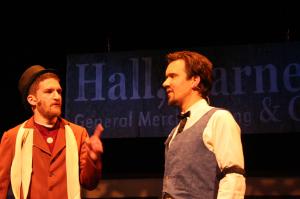 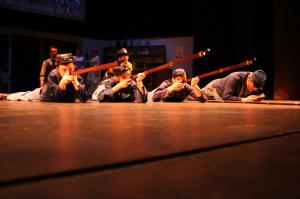 Project: Design a board game.

Status: In progress. (first prototype made and tested. revisions in the works.)

I love to play games and like to create…therefore I found it imperative that I create a board game. Having spent a few of my earlier years at the Forest History Center with the Minnesota Historical Society in Grand Rapids, MN, I found inspiration to do a strategy game based on the unscrupulous practices of early lumber barons. There was a practice of cutting timber beyond the square boundaries of purchased land rights resulting in what were called ’round forties.’ After weeks of brainstorming and planning, I got a very basic prototype made up. One session of test playing on New Year’s Day showed there is some major overhauling to do with the mechanics of the game in order to quicken its play.

The game board was first designed as a square base divided into 16 squares (as a section is divided into 16 40-acre parcels). On top of the board acting as the ground was 48 tiles acting as the trees. The tiles assembled would appear as 16 squares with arcs cut from each of the four sides as visible in the feature image here. Besides being slow moving, the other major strike against the game was the complication of placing and removing the 48 tiles.

So after two months of barely touching this I may have had an epiphany. The tiles need to be removable from the board in order to signify harvesting and thieving of timber. So I thought and so I was married to. As cool as the idea was, however, it just wasn’t practical for set-up and play. Too time consuming, to clumsy to manipulate. I thought maybe there could be tokens put onto the board to signify areas had been cut, but on top of the other tokens already in play along with ice road tokens and hauling pawns it would be far to much going on. Somewhere along the lines the concept of the dry erase marker came to me. I’ve seen other games with a glossy coating that can be written on and erased. In this way the squares and the arcs can all be printed as lines on the base board, tokens and ice roads can be played, and any timber removed can be marked with an ‘X’ on the squares and arcs of the board. Brilliant! Logistics resolved. Now I just have to work out the problem with the mechanics.

Alright so I changed the ‘brilliant’ idea of marking the arcs with a pen. We’ll bring back the arc cut-outs but reduce the number in half by joining two adjacent arcs into one. The two conjoined arc pieces make a pointed oval, which I learned is officially known as a vesica piscis (translated fish bladder?). With 16 40-acre tile pieces plus 24 vesica piscis pieces, the total tile count is at 40- much more manageable.

Also changed are the mechanics. Originally drawing factor cards (horses, men, axes, etc) to perform actions (cut, haul, etc) in the style of Settlers of Catan resources, I found that it was much too slow going and cumbersome to accomplish tasks. I revised it to have a factor board in which tokens are used each round to claim a limited number of factors (reminiscent of Agricola). I have not yet tested it, but in my mind it seems that it will work better. Testing may adjust the quantities of men, horses, axes, etc that are available, but it is certain that there will need to be additional spaces available for an increased number of players.

I made a lot of progress on the game artwork this weekend. The Factor Board is done (pending revision after play testing) and the Character Boards are done, with the exception of importing some old photos and historic stamp hammer marks for the lumber companies.

Inspired by ‘Out of the Hat’ in Bemidji, MN, I wanted to bring a 24hr creative exercise for the stage to Grand Rapids.

As described by the Grand Rapdis Herald Review:

Hyped as “a binge of theatrical absurdity from script to stage in 24 hours,” members of the Grand Rapids Players got together last Friday evening at the VFW as a part of First Friday to do a drawing for their first ever InsomniActs production. Four writers drew prompts for their individual, original plays; first line, last line, setting, and object. They had 12 hours to write the plays before they were handed off to four directors, who drew members of their casts, and who then had only 12 hours to produce the plays. The concept is borrowed from “Out of a Hat,” a similar theatrical production held in Bemidji. Audiences at the Reif Center on the evening of Saturday, Jan. 5, enjoyed four brand-new, never-before-seen (nor seen again) one-act plays entitled “Hells Belles,” “Hawaii Pee,” “Once Upon a Time in a Turkish Harem,” and “12 Hours.”

Check out the news article and photo gallery here.