I often find myself in a black spruce bog/swamp during the winter when the solitude of snow covered evergreens is most inspiring. The soggy peat is easy to navigate when buried under an even blanket of snow. Few have been my trips into the swamp, however, when the snow is gone and the way is wet. This spring, I went where I had gone a month before, when spring revealed crimson pitcher plants gasping for air through the melting snow. Now, beginning of May, the snow and ice were all but gone and the mounds of moss fully revealed. I rediscovered a concentration of pitcher plants. 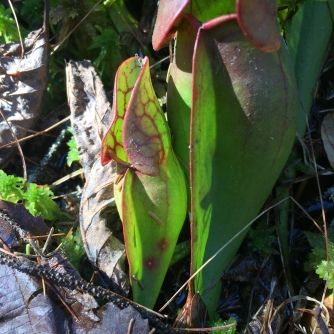 Earlier I had found only last fall’s red survivors, but now there were verdant newcomers to see. I found again more of last year’s cranberries on the moss: still edible, and still tasty. 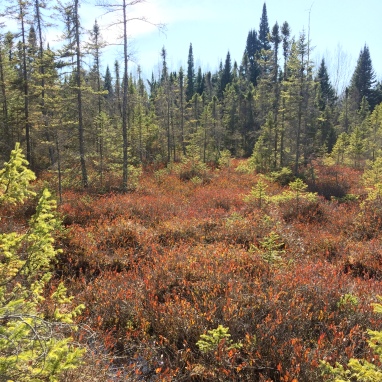 The leatherleaf, still rusted from fall, lit the sphagnum on fire in the open clearing of the bog. I hopped high spots back into the wooded spruce swamp, and finally onto higher ground. I came across a beaver-made pond spanning two levels with a trickle filling one from the other. Ducks came, went, and passed over: woodies, green-wings, golden eyes. The chorus of peepers and leopards was pleasantly deafening. A grouse was playing percussion behind me. Spring was singing. And I didn’t want to leave.