Three strikes and I’m out. Uffda. Maybe I’m just wet (and frozen) behind the ears, but my third winter camping trip for the season and we called it early. Again. For the third time this season. Three for three. Lessons learned, experience earned. – once as a solo, once as a trio, once with five.

We got a late start for the short days of winter, but into the BWCA we hiked, pulling our overloaded pulks behind us. We trekked about two miles in- half was a hilly, wooded descent, and half was flat across frozen lake. We passed another crew of chionophiles on the way in. After reaching and choosing our site, we set up camp and set off to gather wood in the few hours of daylight we had left. With many dead-standing birch visible amongst the spruces, it didn’t seem like it would be difficult to find dead wood down. 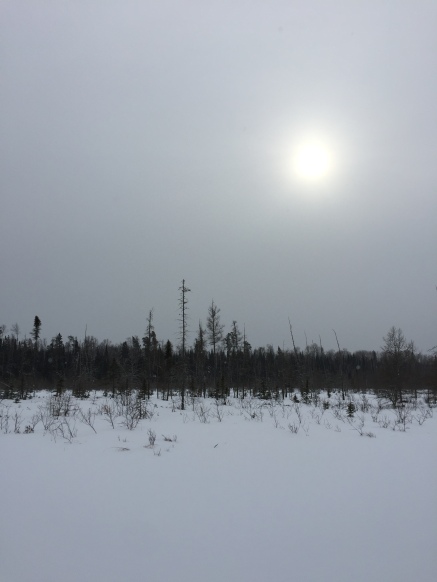 We had erected two tents for the five guys on the adventure, but we quickly decided to try squeezing us all into the 3-man Snowtrekker canvas tent and leave the dome tent for gear storage. The hike in had been through flurries under a hazy sky, but as daylight disappeared, the sky was cleared and it left a sunset that was well worth standing out in sub-zero temperatures.

Darkness fell and the stars shined brightly. We huddled around a campfire that we were painstakingly babysitting to try and get roaring. It was the same scenario I had already encountered winter camping this season. Wood would smolder and eventually burn down, but never get to a self-sustained roar. We packed in a propane burner to cook supper, which was fortunate with the trickling fire we had going otherwise. Air temperature was -10F and dropping. We kept moving to keep warm.

Finally we gave up on our outdoor fire and started one in the tent stove. The propane Buddy Heater intended for the dome tent was brought in to take some chill out of the Snowtrekker. We stayed mostly comfortable until around 6am when the temperature bottomed out at -27F, not including wind chill. We all felt a little frosty in the feet. The breath of five guys had condensed on the interior of the tent, leaving an eighth-inch of frozen flocking to the canvas. The propane was too cold to get the stove going initially. One of the guys brought a bottle of brandy, which was now frozen solid. When the brandy is frozen solid, you know it’s starting to get cold out. Eventually we got the propane stove going and heated water for hot chocolate and warmed up some pre-made breakfast burritos. A breakfast burrito never tasted so delicious.

Forecast for the day was expected to slowly get warmer, but stay below zero until 4pm. It would peak at one above at 4pm, and then start dropping again with the sun. Our sleeping gear was wet with breath, and we voted to call it a trip after one night. We packed up and hiked two miles back out across the frozen lake, and then up the rolling, climbing hills that exhausted us the second half of the trek out. An adventure indeed, but a little defeating to call yet another trip short this season. Maybe next time we’ll get it right.