In a story celebrating life on the Mississippi, one of the first visual elements we wanted for the show ‘Ziibi’ was a life-sized heron interacting with characters and audience. Originally the hope and concept was to build the heron mostly out of natural materials, such as a body framed with young, flexible saplings or reeds covered by dyed fabric. For various reasons, that proved to be impractical, and so we ended up constructing the bird mostly from plastic, and mostly from recycled materials. The body may be recognizable as a 5 gallon water cooler jug, which I had several laying in my basement from buying water to make home brew. Legs were constructed from PVC left over from another project. 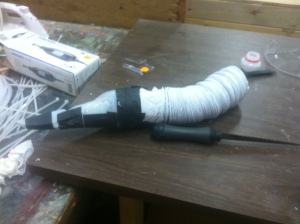 Feathers were made from various recycled milk jugs, which incidentally don’t hold paint very well. We’d recommend sanding them first so that the paint can stick. Breast and crest feathers were made from zip ties, and the neck was a flexible vinyl hose, and the head from a quart-sized milk bottle. So although the heron wasn’t made from natural, local materials as originally hoped, at least she was about 75% recycled/reused material.

Without movement, a puppet like our heron is just a pile of lifeless plastic. It takes talent and skill to bring such an inanimate object to life and give it character. Our puppeteer, Rachel Randle, studied YouTube videos of heron movement and did an applaudable job of bringing the bird to life and giving Sharon the Heron characterization. Little things like leading the walk with the movement of the head, shaking water off the head, and preening itself were subtle tricks that made the audience see a living heron and not a pile of recycled plastic held by an actor. 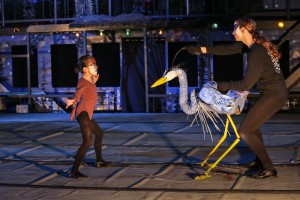 Building the heron, as well as the other props and puppets, was a series of experiments, bouts of trial and error, trouble-shooting, and repair. Originally designs were attempted to make the feet and legs move with an engineering of levers and pulleys so that it could be made to walk with the same hand holding the bird’s body. This worked with minor success, but had limited control and effect. We designed to connect the bird’s feet to the puppeteer’s feet. That brought its own challenges, but proved to be the best control of movement and character. As evident in the photo, the feet were a bit gimpy and had some trouble staying aligned. If we were doing more than a short run of six shows, we certainly would have gone back to the drawing board. But as it was, the feet were generally functional and only occasionally did the heron look like she was walking in a constant grapevine action; or more accurately, only occasionally was it walking with broken ankles.

We had the heron walking about in the crowd for fifteen minutes before the show, and she was a big hit. Kids loved her, dogs feared her, and adults struggled to keep their popcorn away from her. Now that the run of ‘Ziibi’ is over, I hope she will find another opportunity to come alive again.