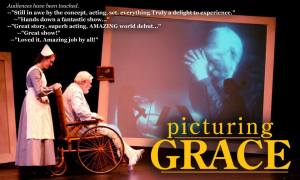 The premiering performances of Picturing Grace were met with mixtures of laughter and tears. A follow-up article published in the Grand Rapids Herald-Review:

The Grand Rapids Players’ fall production, “Picturing Grace,” continues its performances at the Myles Reif Center this weekend. Written and directed by John Schroeder, “Picturing Grace” tells the story of the two men made famous around the world because of the picture “Grace”; the man who posed for it and the man who photographed it.

Eric Enstrom, a Swedish immigrant photographer, is disheartened by the pessimistic views in his community. In his search to capture the photograph that will make people conscious of the things they have rather than the things they have to do without, the international renown picture “Grace” emerged after a chance meeting with a Swedish immigrant peddler, Charles Wilden. The play tells the backstory behind the famous picture, sharing local history in a dramatic presentation that is humorous, heartwarming, and even heart-wrenching at times. Audiences for the show’s opening weekend left the theater with rave reviews.

A few reviews from audience members were published in the Grand Rapids Herald-Review:

“PICTURING GRACE” – what a remarkable production going on at the Reif. Written by local artist, John Schroeder, who was inspired by the picture GRACE taken by Eric Enstrom in 1918 in Bovey. If you want a great Sunday, Oct. 19 at 2 p.m. or Friday, Saturday, Oct. 17,18 at 7:30 p.m. this play is a must. The acting is so excellent that I was drawn into the production with emotions ranging from high laughter to sadness and for some even tears.

Those in charge of the lighting and technical aspects create several dramatic scenes simply by just flipping a light on or adding musicians in the background. I haven’t witnessed a production so heart-warming as this in years. The play also delves into the history of the Enstroms, their studio fire, the town being nearly wiped out by the flu epidemic, and of course the ethnic issues created by the “melting pot” of people working in the mines. If I was to rate this production, it is spectacular. Congratulations to the Grand Rapids Players and I hope those of you reading this will venture out for a feature production you will not forget. Pictures tell stories…and this one will make you thankful.

Thank you to all involved in heart-felt production

Kudos to the Grand Rapids Players for a very moving and incredibly good rendition of the story behind the picture of “Grace” in their production of “Picturing Grace.”

This performance which my husband and I attended on opening night, Saturday, Oct. 11, held us captivated with the choreography, background music, acting and the history behind this famous photograph.

The special effects with the silhouettes behind which, in black and white, we could see Maggie Anderson and Olivia Skaja, members of the Itasca Orchestra and Strings Program, play their instruments beautifully, interspersed with early scenes of Bovey at the time of the photo “Grace,” was taken by Eric Enstrom, a man, who espied to the theory that we need only the basics to make us happy, the exact feelings he captured and what made “Grace,” what it is today.

If you haven’t already seen this inspiring performance, go to the Reif this coming weekend and see for yourselves, the image of “Grace.” Thank you to all involved in this very heart-felt Production.

A special thanks to the Grand Rapids Players and John Schroder for their wonderful play, ‘Grace.’

As a local historian and a theatre buff, we were thrilled to watch the story unfold. If you get a change to go, don’t miss it. This critic found nothing to criticize.