Project: Shakespeare in Old Central School Park: The Taming of the Shrew

Despite the fact that Shakespeare is the most overdone playwright in history, our community has never attempted to tackle the bard. So after a chance meeting happened between Nathan Bergstedt and John and Steph Schroeder in the park outside Central School, a conversation ensued regarding how awesome it would be to do Shakespeare right in that very spot. It didn’t take long before everyone just looked at each other and asked, “So, we’re really going to do this, right?”

Though doing Shakespeare in an open park is not a new concept by any means, it’s new to Grand Rapids, making our work on getting this play off the ground partly experimental, partly innovational, as well as partly culturally established. The script is adapted to be closer to an hour long, as well as “culturally updated” in order to make it more understandable to a contemporary audience. Performances are on Labor Day weekend (in order to hopefully draw in tourists) and the following weekend for the First Friday art walk in September (which would be more focused on local audiences). Since First Friday is an art walk that celebrates local art, we thought it was about time that local theater became involved with the monthly institution.

We gathered a cast of 11 to present a one-hour adaptation of Shakespeare’s Taming of the Shrew. We’re performing the end of August/beginning of September at the park outside Old Central School in Grand Rapids, MN. With help on costumes and The Forest History Center, our local site for the Minnesota Historical Society, is expanding by bringing in external groups for programming and has invited us to bring the show to them. We’ll be reviving it for their guests on October 5th. 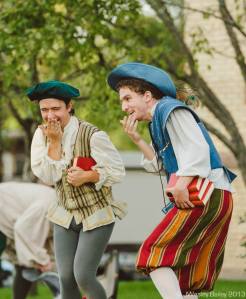